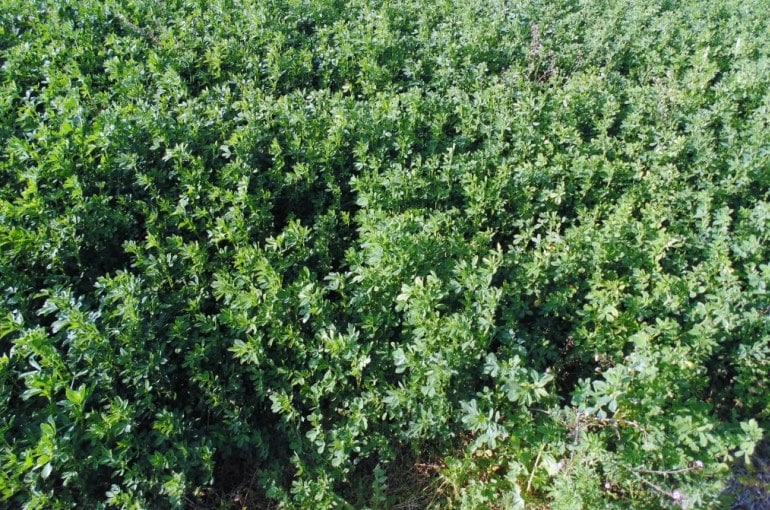 Most farmers stop cultivating their alfalfa stands after the 4th year, because the yield has decreased significantly (it may drop 15% every year). As it happens in many other plants, alfalfa is affected by the phenomenon of autotoxicity. This means that alfalfa plants produce toxins that inhibit the development of new alfalfa plants in the same field. Consequently, after harvesting the alfalfa production of the 4th year, most farmers destroy their alfalfa plants by plowing deeply and then they sow wheat, corn or barley in the field. After harvesting the yearly wheat, corn, or barley production, they sow again alfalfa seeds for their next 4 years cultivation. This crop rotation benefits both alfalfa and wheat/barley/corn. On the one hand, cereals tend to decrease the development of weeds, leaving the field free for the alfalfa cultivation. On the other hand, there are findings suggesting that corn following alfalfa yields approximately 10% more than corn following corn.

You can enrich this article by leaving a comment or photo of your alfalfa crop rotation methods.

5.) Sowing and Seeding Rate of Alfalfa

Do you have experience in Alfalfa cultivation? Please share your experience, methods and practices in the comments below. All the content you add will be soon reviewed by our agronomists. Once approved, it will be added to Wikifarmer.com and it will influence positively thousands of new and experienced farmers across the world.