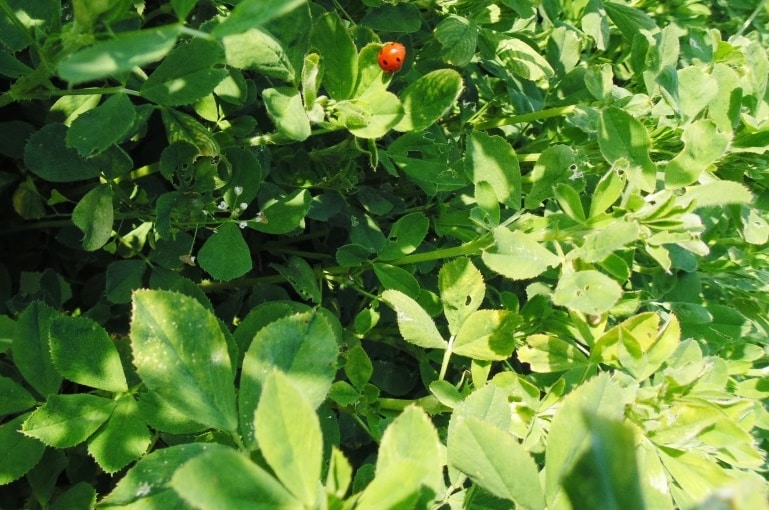 Alfalfa (scientifically called Medicago sativa) or Lucerne is the most important forage crop in the world. Alfalfa means “father of all foods” in Arabic. It is cultivated in more than 70 countries, due to its great adaptability and its multiple uses. It can be used for grazing of horses, sheep, goats, pigs, chickens and dairy cows. It can also be used as hay, silage, green manure and as a cover crop. Alfalfa can also be eaten by humans (the sprouts –not the seeds). It contains high levels of many essential vitamins, such as A, B, D, E, K and it is rich in minerals.

It has been proposed that alfalfa has many human medicinal properties that help against arthritis, urinary tract infections, kidney, bladder and prostate disorders. It is also used for the lowering of cholesterol and as a dietary supplement. Alfalfa can be consumed as a tablet or capsule, consumed in a tea or eaten as a leaf. The FDA has advised that children, the elderly and persons with weakened immune systems should avoid consuming raw alfalfa sprouts. Many people consume alfalfa tablets and capsules as a dietary supplement.

Some researchers support that alfalfa is indeed the most important crop in the world, although most of alfalfa production is not directly consumed by humans, as wheat and barley. If alfalfa did not exist, the global Meat and Dairy industry (among others) would be different, probably considerably smaller or less efficient.

5.) Sowing and Seeding Rate of Alfalfa

Do you have experience in Alfalfa cultivation? Please share your experience, methods and practices in the comments below. All the content you add will be soon reviewed by our agronomists. Once approved, it will be added to Wikifarmer.com and it will influence positively thousands of new and experienced farmers across the world.