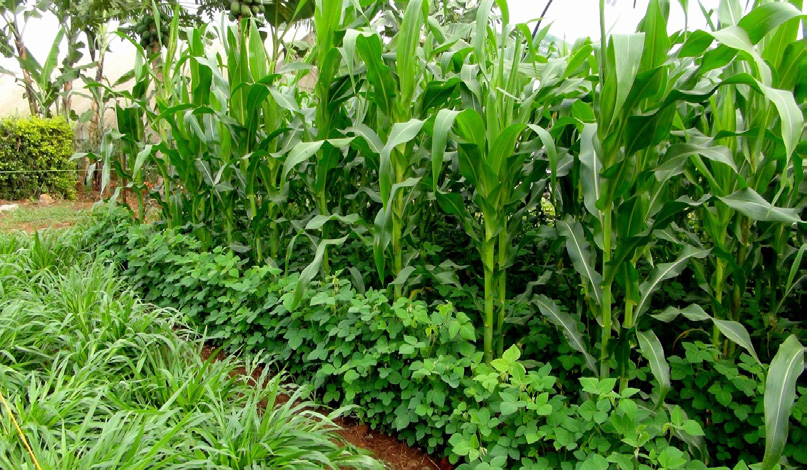 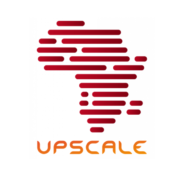 Do you lose your maize yield to stemborers and striga?

Stemborers and Striga weeds cause significant losses to maize production throughout Africa. Maize yield losses due to stemborers can vary from 20-40%. Striga weeds infest 40% of the arable land in sub-Saharan Africa, causing an annual crop loss of US$ 7 to 13 billion. Around the Lake Victoria basin, infestation by Striga weed causes 30 to 100% loss in maize yield. Weeding for Striga control is both time-consuming and labor-intensive. The use of insecticides for stemborer control is not only expensive and harmful to the environment but is also ineffective.

The ‘push-pull’ habitat management approach for managing these two important pests·- one an insect and the other a weed-was developed by ICIPE in partnership with several institutions: the Kenya Agricultural Research Institute (KARl), the Kenya Ministry of Agriculture, and the Kenya Ministry of Livestock and Fisheries Development, and Rothamsted Research UK. Push-pull limits crop losses by stemborers and Striga weeds. At the same time, it conserves soil and water while preserving biodiversity.

The approach involves trapping stemborers on highly susceptible trap plants (the pull) and driving them away from the maize crop using repellent intercrops (the push). Plants that repel stemborers as well as inhibit Striga weed have been identified. These plants also provide high-quality livestock feed, thereby increasing milk and meat productivity. Over 2000 farmers in Kenya have confirmed in on-farm trials that push-pull led to a significant reduction in stemborer pests and Striga infestation and higher maize yields.

Stemborers: Meet the most destructive pests of cereal crops

Stemborers are one of the most destructive pests of cereal crops and can significantly reduce the yields of maize and sorghum on smallholder farms. These pests can cause yield losses of 20 to 40% (or even 80% in some cases) if they are not controlled. Controlling stemborers with insecticides is very expensive for resource-poor farmers and can also harm the environment.

Stemborers are the most important insect pests of maize in Africa, but they also attack other cereal crops such as sorghum, millet, and sugarcane. In eastern Africa, two species of stemborers cause heavy damage to cereal crops: Busseola jusca (Figure a) and Chilo partellus (Figure b). Bussola fusca is indigenous to Africa and is present in high- and mid-altitude areas (3,500 ft [1,077 m] above sea level and higher). Chilo partellus is present in low- and mid-altitude areas (0 to 4,000 ft [1230 m] above sea level). Chilo partellus accidentally came to Africa from Asia in the 1930s. 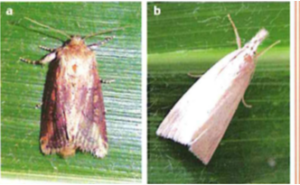 The adult moths of stemborers are seldom seen in farmers’ fields as they are inactive during the daytime. They become active after sunset and lay their eggs during the night. Adult moths lay their eggs on maize plants; after the larvae emerge, they feed on leaves for two to three days and enter the maize stem. Bussola fusca lays its eggs between the stem and leaf sheath, whereas Chilo partellus lays its eggs on the leaf surface in the form of egg batches. After the larvae bore into the maize stems, they feed and grow within the stems for 2-3 weeks. 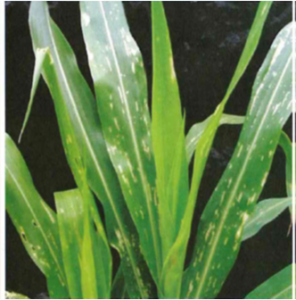 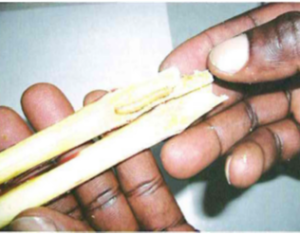 Damage is caused by the worm-like larvae, which first feed on young leaves but soon enter into the stems. During the early stage of crop growth, the larvae may kill the growing points of the plant, resulting in deadheart. At a later stage of growth, the larvae make extensive tunnels inside the stem. This weakens the stalk, so it breaks and ‘lodges’ (falls over). Damage caused by stemborers averages 20-40%, meaning that between 2-4 bags of maize are lost out of every 10 that could be harvested. When the larvae are fully grown, they pupate and remain inside the maize stem. After 7- 14 days, the adults emerge from the pupae and come out of the stem. They mate, lay eggs on the maize plants again, and continue damaging the crop. 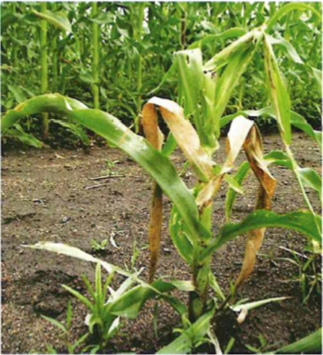 Striga weeds can cause maize yield losses of 30 to 100% or complete crop loss if they are not controlled. The weed grows by attaching itself to the maize plant. Its roots penetrate the crop’s roots and start to draw nutrients from the maize. This causes severe stunting of the maize crop and yield loss. The Push-pull strategy limits crop losses by Striga.

Striga or ‘witchweeds’ are parasitic weeds that affect cereal crops in many parts of Africa, reducing production or causing a complete crop failure. The most affected crops are maize, sorghum, rice and sugarcane. If both stemborers and Striga weed attack maize plants, the yield loss is often 100%. In East Africa, there are two common species of witchweed, Striga hermonthica, and Striga asiatica. Striga hermonthica is common around the Lake Basin, while Striga asiatica is mainly found in the coastal areas. 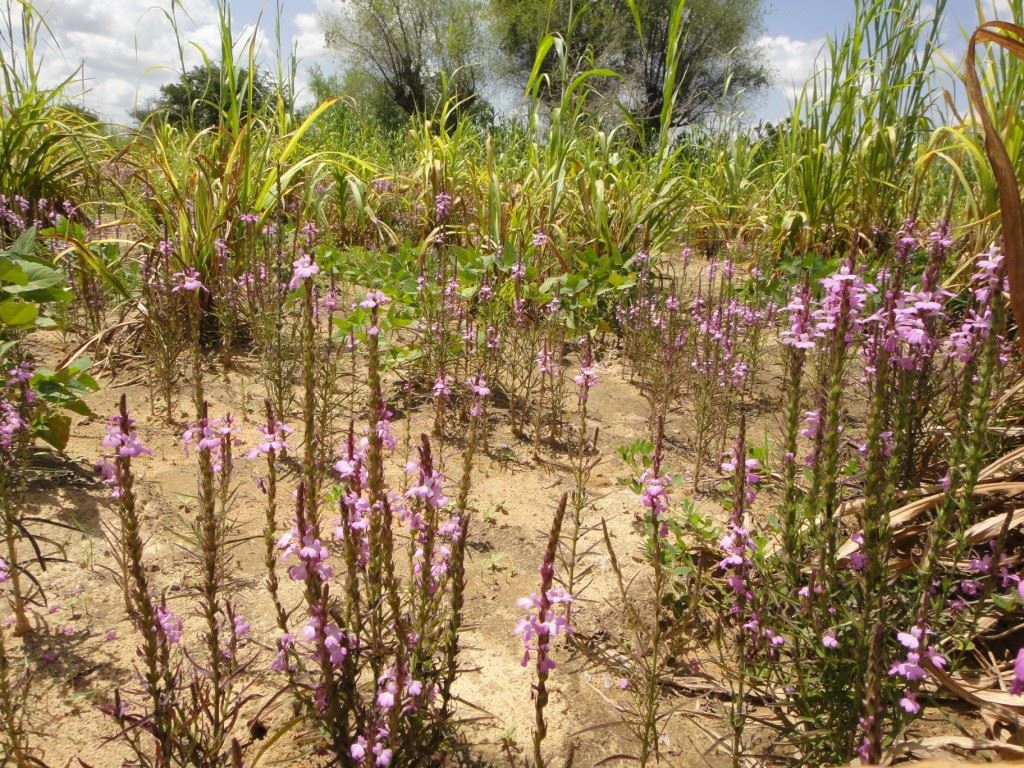 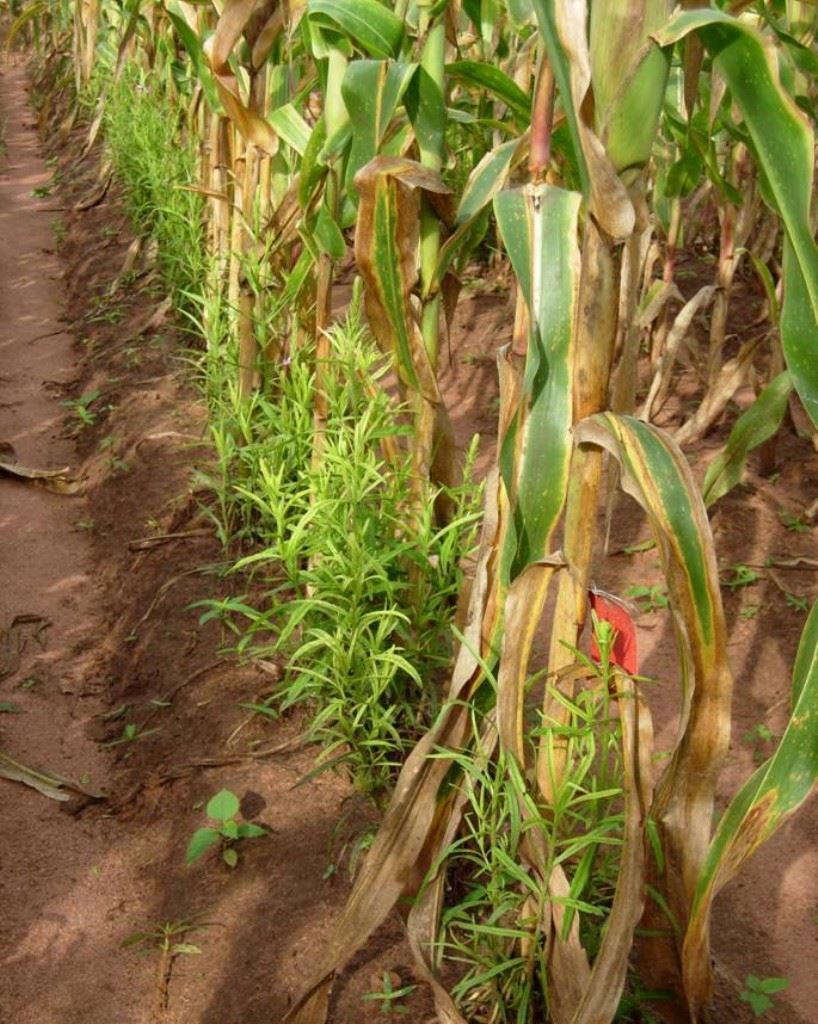 When a farm is infested with Striga, the affected plants seldom grow more than one foot (30 cm) tall. The weed does not put roots into the soil to grow on its own but grows by attaching itself to the host (e.g., maize) plant. Each Striga plant can produce up to 20,000 – 50,000 seeds, which lie dormant in the soil until a cereal crop is planted again. This dormancy can last for over 15 years. As Striga germinates, its roots grow towards the host crop. They penetrate that crop’s roots and start to draw nutrients from the host. This causes severe stunting of the host crop and yield loss. 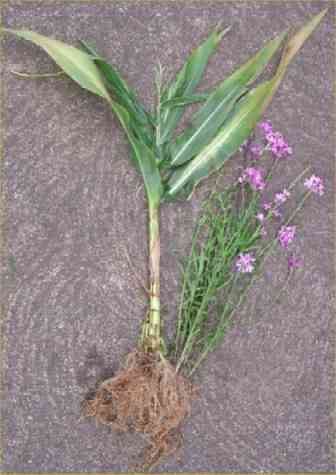 Taking into account the peculiar nature of Striga seeds, farmers are advised to control it before the weed emerges above the soil. This is because, by the time it emerges, much of the damage to the maize will have been caused.

Although various control methods have been proposed, they are usually not successful. For example, although manual removal of the Striga reduces re-infestation, it is considered uneconomical since most damage is done even before the weed emerges. Therefore, any control strategy has to begin within the soil.

How does push-pull reduce maize losses?

Push-pull is a simple cropping strategy whereby farmers use Napier grass and desmodium legume (Silverleaf and Greenleaf desmodium) as intercrops. Desmodium is planted in between the rows of maize. It produces a smell or odor that stemborer moths do not like. The smell ‘pushes’ away the stemborer moths from the maize crop. Napier grass (Pennisetum purpureum) is planted around the maize crop as a trap plant. Napier grass is more attractive to stemborer moths than maize, and it ’pulls’ the moths to lay their eggs on it. However, Napier grass does not allow stemborer larvae to grow-survive on it. When the eggs hatch and the small larvae bore into Napier grass stems, the plant produces a sticky substance like a glue that traps them, and they die. So, very few stemborer larvae survive, and the maize is saved because of the ‘push-pull’ strategy.

In addition, a ground cover of desmodium (Desmodium uncinatum, or Silverleaf), interplanted among the maize, reduces Striga weed. Research has shown that chemicals produced by the roots of desmodium are responsible for suppressing the Striga weed. Therefore, Striga does not grow where desmodium exists. As a legume, desmodium also fixes nitrogen in the soil and thus acts to enrich the soil.

How does push-pull work and how a farmer can start using it?

In drier areas, the best plants for push-pull are Greenleaf desmodium between the rows of crop and brachiaria grass around the border. 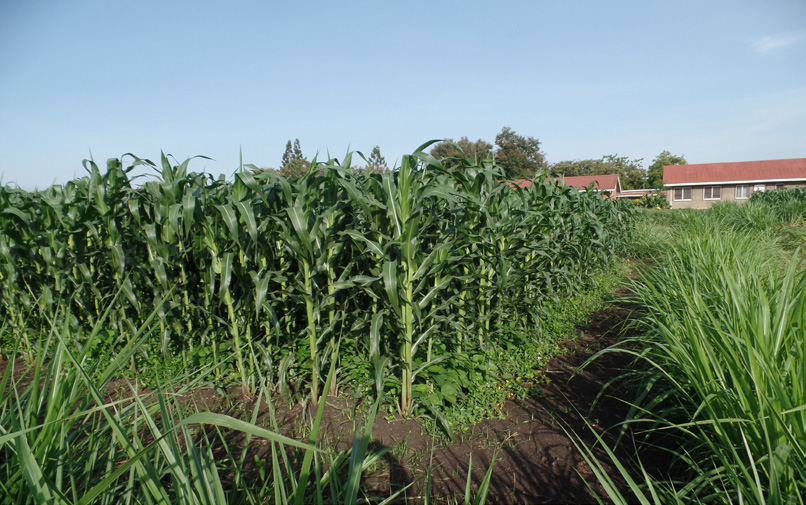 A Conventional Push-Pull field with Silverleaf desmodium and Napier grassA push-pull plot can range from 50 x 50 m (minimum) or be used on a farm of any size, provided the fields are restricted into 50 x 50 m sections using border rows of Napier grass. The minimum width of a push‑pull plot is not less than 10 meters (32 ft).

A real-life example: Food to eat, money to spend

Most farmers adopting push-pull have increased their maize yields by over 100%. The Were family now harvests two bags of maize (180 kg) from a push-pull plot of only 20 x 30 m, while the same area before would have given them only half a bag (45 kg). 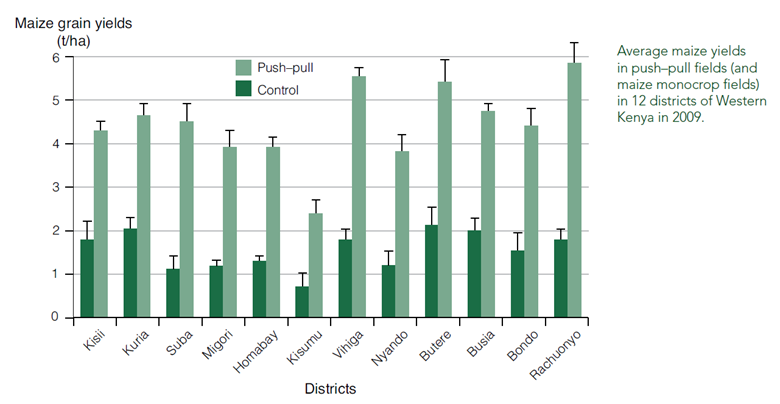 UPSCALE is a H2020 Research & Innovation project worth €7.66 million, which started in November 2020 and lasts for 5 years. The project aims to take key steps to realize the transformative potential of push-pull technology by expanding its scope and applicability from individual fields to whole landscapes and regions, and from cereal to other important crops and cultivation systems. The overall goal is to address food security, livelihoods and climate change resilience in the sub-Saharan region of East Africa, while reducing the environmental impact of agricultural practices. For this, it will foster the design, adaptation and adoption of strategies for integrated agro-ecological management based on push-pull technology for wide-spread and climate-resilient sustainable intensification.