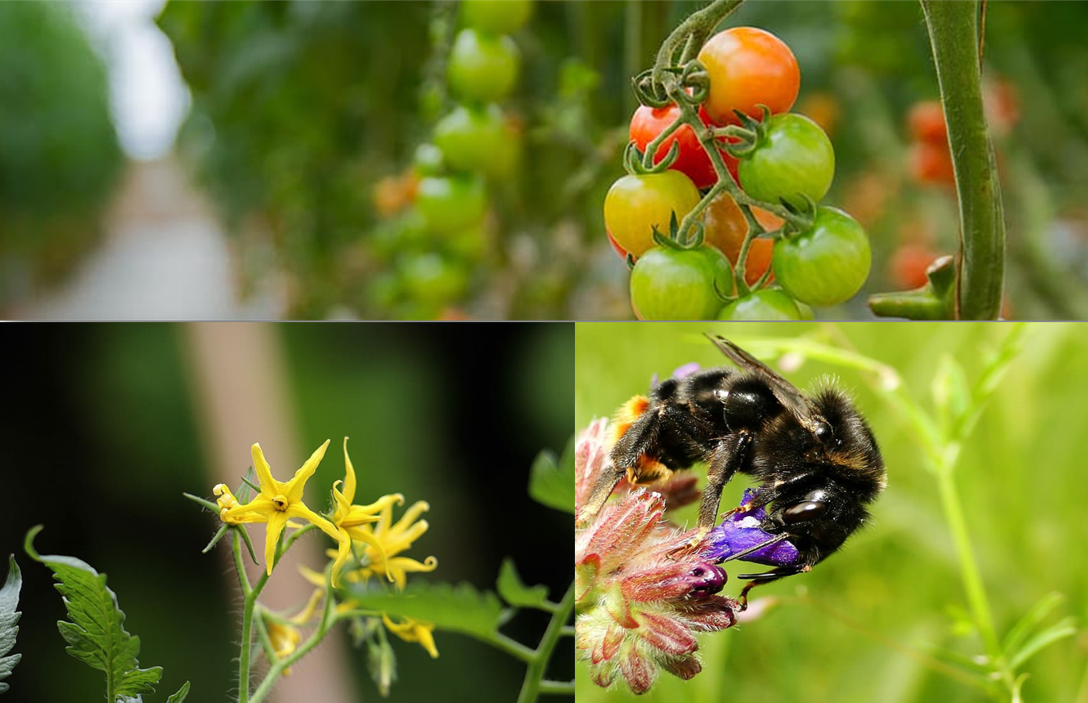 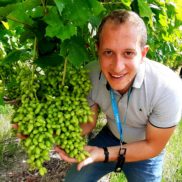 Bumblebees are used to pollinate greenhouse crops since the late 80s. Until today they remain a very reliable source of pollination, especially in tomato crops. Before the development of commercial products with bumblebees, fruit formation was based on the use of synthetic auxins such as 2,4-D. Thus, bumblebees contribute to the reduction of chemical residues in fruits.

The term “bumblebee” refers to the insects of the genus Bombus under the Hymenoptera Class. Bombus terrestris is the most common species used in greenhouses. Pollination is achieved by the strong thoracic vibrations produced by the bumblebee, which are transmitted through its legs to the flowers (Picture 1). After a flower visit, the bumblebee leaves a mark on the flower which resembles a bruise (Picture 2) and is a sign of successful pollination. 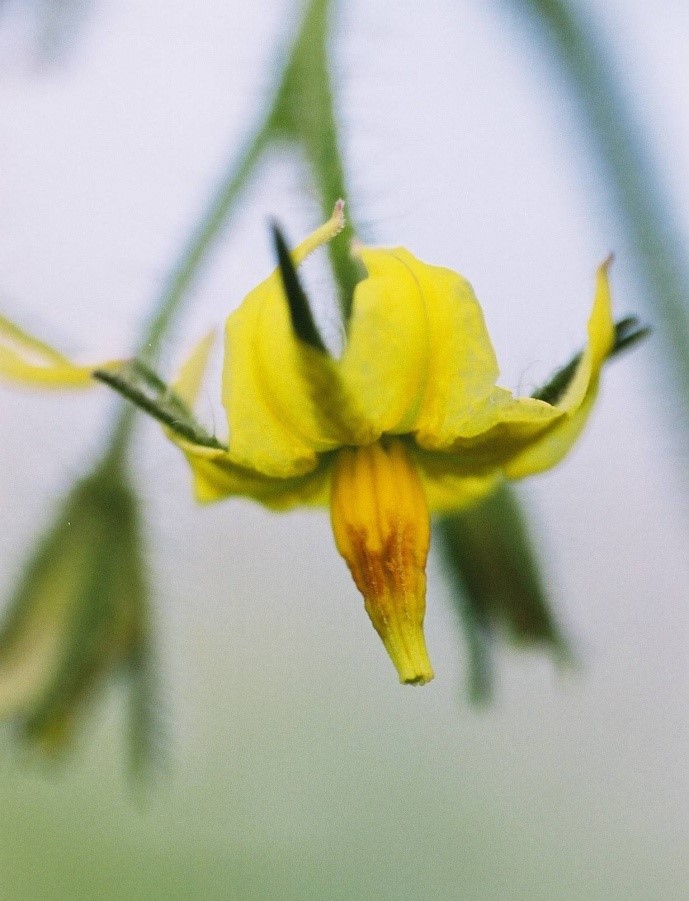 A commercial hive consists of the queen, workers, brood and are supplied with sugar water to cover energy needs (picture 3). Workers are in need to feed the young brood and they look for pollen, therefore they pollinate crop flowers. The emergence of brood from the cells will increase the population of pollinators and subsequently a larger portion of flowers will be visited. The travel distance of workers is quite high and can reach up to 3 km away from the hive. In practice, a single hive is used to cover a 2000m2 greenhouse area. 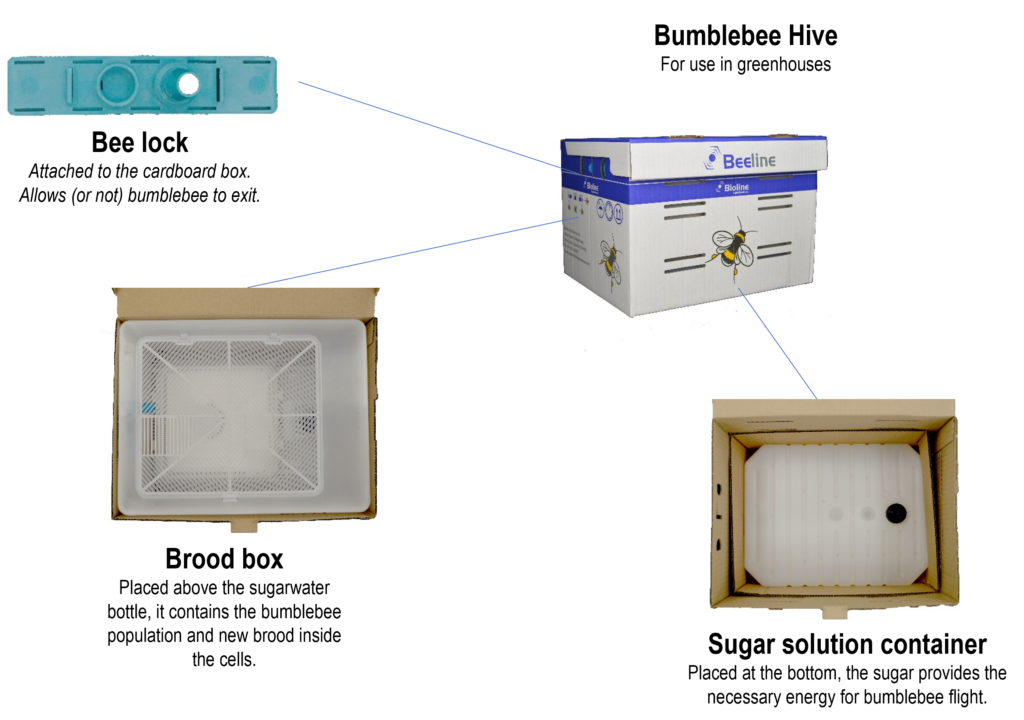 Picture3. Parts of a commercial bumblebee hive for use in greenhouse crops. Source: Bioline Agrosciences

Many biotic and abiotic factors can influence the quality of pollination in greenhouse crops.

Plant fitness and vigor are of high importance to achieve good pollination. For instance, when many lateral shoots are left to grow on the crop, then there will be a period of time with a large number of open flowers. In this case, if the existing number of hives is not sufficient to assure flower fertilization, then it is recommended to add an additional hive(s) into the greenhouse. The amount of water given to the plants (irrigation) can affect the quality of the pollen and hence the development of the hive itself. Water stress can cause bad pollen resulting in unattractive flowers for the bumblebees.

Environmental conditions such as temperature, humidity, and radiation play the most critical role in optimal pollination. Generally, a temperature (T) and relative humidity (RH) range between 23-28 oC and 60-75% respectively is considered an excellent combination for pollination. Temperatures above 30oC cause bumblebees to stay inside the hive and spend more time on temperature regulation instead of foraging. In cases of high temperatures, it is advisable to take protective measures such as the use of cooling and shading systems. Regarding relative humidity, values outside the optimal range can cause either too dry (low RH) or sticky pollen (high RH) making it less attractive to bumblebees and not suitable for the flower stigma.

Obviously biotic and abiotic factors do not act independently, as harsh environmental conditions reduce the strength of the plant and promote the vegetative stage instead of the flowering and fruit setting. It is good to keep in mind that these guidelines are indicative and the influence of these conditions can vary a lot among different cultivated varieties.

Practical advice: How to place a bumblebee hive in the greenhouse

Farmers often spray their crops against various pests and diseases with substances that may be toxic to pollinators. Bumblebee hive producers provide comprehensive lists and databases regarding the compatibility of Plant Protection Products (PPP) with bumblebees. Newly developed active ingredients tend to be friendlier with bumblebees and require the closure of the hive only for a few hours after the application. In case the farmer detects a significant disturbance in the behavior of the pollinators or the size of their population, he/she must consider changing the product used and if needed, replacing the hive(s) affected.

Hoverflies are insects that feed on a variety of sources. Adults are often found in flowers feeding with pollen and nectar (Picture 4) while larvae can either feed on organic matter or on other insects as predators. Recently, two species (now commercially available) which are used to treat aphid infestations, found to significantly increase fruit set and fruit weight in sweet pepper plants under greenhouse conditions. In other words, the same organism is able to provide biocontrol and pollination services at the same time with a great benefit to the farmer. 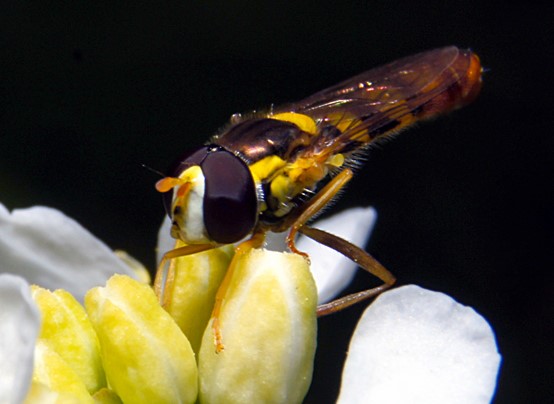 Velthuis, H. H. W., and A. van Doorn. 2006. A century of advances in bumblebee domestication and the economic and environmental aspects of its commercialization for pollination. Apidologie 37:421-451.

Dimitris Afentoulis is an Agronomist specialized in Crop Protection. He originates from an agricultural family that runs the oldest gardening shop in the centre of Athens over four generations. Dimitris holds a Master of Science degree in Plant Pathology and Entomology from Wageningen University and has a broad educational background in Crop Science and Agriculture. During his studies, he published four peer-reviewed articles in scientific journals related to biological pest control and insect systematics. He has participated in numerous research programs, scientific conferences and technical trainings. Throughout his career, he served as an IPM technical consultant with expertise on field demonstration of biocontrol agents against crop pests and diseases. Currently, he is responsible for Product Development and Technical Support at Syngenta Hellas in South Greece.