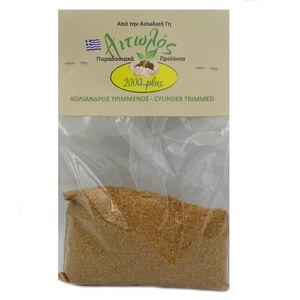 Mataraga of Etoloakarnania, on the edge of Lake Trichonis.
-the fruits are used externally against rheumatism and joint pain.
The coriander infusion causes the secretion of gastric juices and thus becomes gastric, gas cleansing and sweating.
- soothes diarrhea mainly in children.
-stimulates the appetite
-it is said to be sedative for people suffering from hysteria and migraines.
- Coriander seeds are used to flavor alcoholic beverages.
-Oil, which is produced from its seeds, is today one of the most widespread on the planet and is also used as an ingredient in commercial foods.
-the roots are used in a variety of Asian cuisines.
-In Germany and South Africa, the seeds are used in the production of sausages.
-The chopped coriander leaves are a garnish in Indian dishes.
-The most common use of seeds is as a key ingredient in curry powder.
In Cypriot gastronomy, coriander seeds have an undeniable use as a garnish in green, crushed olives.