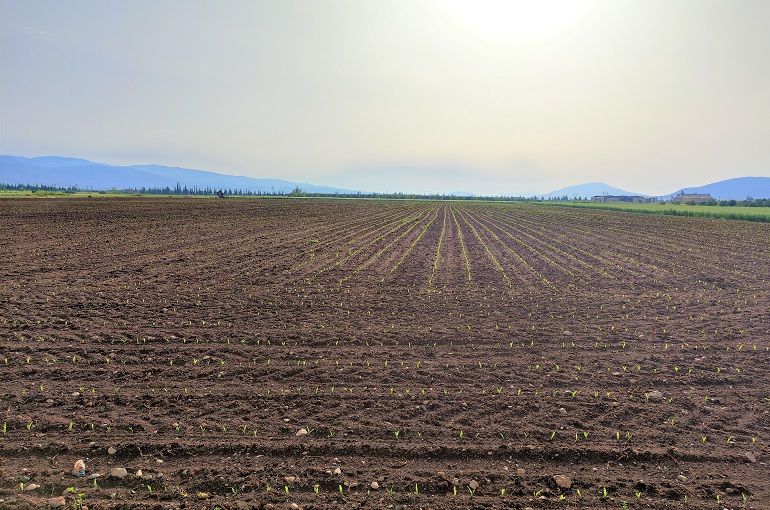 Corn needs loose soils that offer proper aeration and drainage and at the same time maintain sufficient amounts of water close to roots. Too heavy or too sandy and poorly drained soils are not suitable. In general, the plant prefers pH levels higher than 5,5. More specifically, the optimum pH for corn is between 5,8 and 6,8. Having pH levels close to 5, may reduce the production up to 35%. Corn is slightly sensitive to increased salinity levels.

After selecting and testing the maize variety, farmers need to prepare their field for sowing. The appropriate seedbed preparation can dramatically affect germination, emergence-establishment of the crop, and of course crop growth, leading to higher final yields.

In conventional tillage systems, farmers apply 1-3 soil tillage sessions. It is highly advised that the farmers adopt a rounded approach and avoid unnecessary tillage that will harm soil structure and lead to soil compaction. Apart from conventional tillage, the farmer can implement stubble-mulch, reduced or no-tillage. All four systems have advantages and disadvantages, and the farmer should consider them carefully before choosing which plan best fits the field’s unique characteristics (1).

Tillage aims to create a loose and crumbly soil surface and consists of the primary (mechanical) weed management technique. The soil preparation starts much earlier than the actual sowing of corn seeds. From the previous crop’s harvest, farmers often chop and evenly spread crop residues on the field surface. The residue management can play an essential role in maintaining-improving soil texture-moisture and reducing disease and insect problems (Gentry et al., 2013). It is necessary to implement some weed control measures before sowing corn, in order to minimize the competition of the crop with the weeds for sunlight, space, water, and nutrients.

In organic cultivation systems, where chemical herbicides cannot be applied, maize farmers should take extra care while choosing the most appropriate time to enter their field to perform tillage. In this case, most farmers choose to intervene twice, once after the first weeds have started growing and once a bit later (around 2-3 weeks) to “catch” the second round of weeds (usually less than a week before they sow)(3).

It takes place earlier in the season, usually after the harvest of the previous crop (or 1-2 months before sowing the corn) (4). At that time, the farmer can incorporate some compost into the field. Early plowing should be avoided in areas with a slope greater than 8% since it will contribute to soil erosion due to winter rainfalls and strong winds.

Tilling during early spring serves as a very efficient weed control measure. At the same time, it contributes to the removal of excess water from the soil, improves soil aeration, and promotes the warming of the seedbed. If the farmer has a cover crop like alfalfa on the field, he/she can incorporate the plants into the soil with the first tillage.

Depending on the soil texture, the farmer may need the following equipment for the primary tillage:

It is usually performed a few days before sowing the crop. Farmers can use:

In dry, sandy soils, farmers should be cautious not to destroy the soil structure, and they should avoid passing the field too many times with the machinery and disturbing the soil.

Organic farmers might choose to make one more tillage right before sowing. If the weather is warm enough, they might decide to sow right after the second tillage. Extra tillage might be necessary if there is a rainfall too close to the sowing day since in this case, the weeds will germinate much faster than maize and will “drown” the young seedlings (2).

Under no-tillage systems, with crop residues from the previous crop remaining on the soil surface, the preparation is limited to one-pass planting and fertilizer operation to limit the disturbance of the soil surface. In this case, the farmer will need to create a 2-3 cm wide strip or open small holes into the ground to place the corn seeds (Karki, 2014). The use of No-tillage planters might be needed for better results.

Factors to consider when selecting the sowing date for maize

The seed used should always be certified. In this case, the farmer can be certain for some important attributes of the maize seeds:

The grand majority of seeds germinate at the same time, which means that all plants will grow at the same pass, leading to a dense crop, with a good weed competitive ability and a ”fixed” harvest day.

The number of seeds that the farmers will sow per hectare should generally reflect the final desired plant population they want to have, and it depends on:

Spacing between rows varies between 0.6 and 1 m.

Generally, when corn is cultivated for livestock feed (forage), the plant population is higher (usually by 50%)

A higher than normal number of plants per hectare may result in the development of tall plants because they seek access to sunlight. The plants start to lean because the stem is incapable of supporting them. Besides, the water and fertilization requirements increase, and the final protein content of the grain may decrease.

The sowing depth is usually 4 to 7 cm (1.5-2.7 inches). When the soil conditions are favorable or/and rainfall is expected, the seeds can be sown closer to the surface but never in a depth less than 2.5-4 cm. Very shallow or deep sowing will lead to problematic seed emergence and plant establishment (iGrow corn) (2). Finally, in not well-drained, cold soils, farmers can choose to sow in ridges.

It is suggested, if possible, to avoid sowing by hand (spreading the seeds, random seed placement). Uniform spacing between seeds-plants can increase the yield and facilitate weed control even after plants’ emergence (Torres, 2012). Before sowing, the farmer needs to maintain, calibrate and prepare the planter that will be used. Depending on the field area and the farmer’s economic availability, he/she can use either a tractor-driven corn planting machine (pneumatic planter) or a manual seed planter (6). Even though new pneumatic planters can maintain high sowing precision even at higher tractor speeds, it is advised to keep a medium speed for better results.