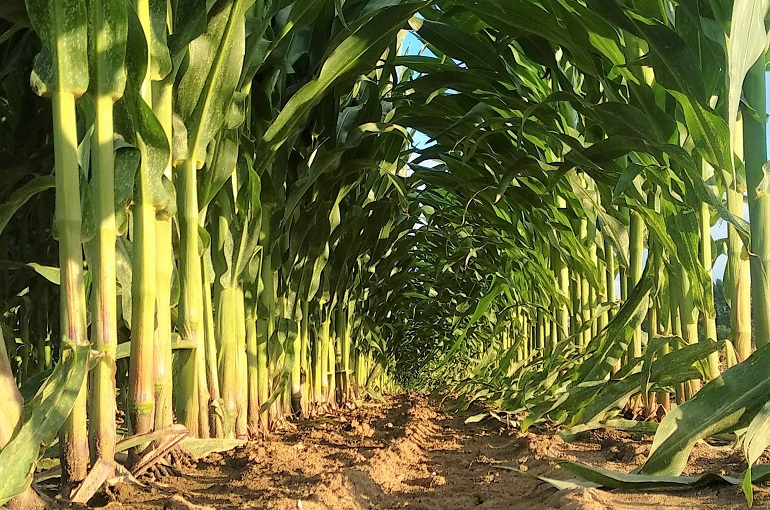 Weed management is maybe the most expensive activity in maize cultivation, but is absolutely necessary. The reason is that the weeds compete with maize plants for water, nutrients and access to sunlight, especially during the “critical stages” of the crop. Thus, if they are not controlled, they can reduce the final yield of corn up to 30% or, in some cases, even 91% (1, 2).

Weed management, like crop protection against phytopathogens, should be addressed with a holistic system by considering and implementing a variety of control strategies. The maize farmer has multiple control measures like tillage, use of herbicides, and biological control at his/her disposal. The final management strategy will be formed after considering factors like:

In all management practices, the priority is to reduce the weed seed bank in the soil, limit the number of weeds that have emerged in the field during the corn sowing time, and finally keep the field weed-free during the first critical stages of corn seedlings growth.

The composition (meaning the weed species growing in our field) is the major factor that will affect the weed management measures that a farmer will use. In this context, the farmer should keep a record of the weed species growing in his/her field and their population. Moreover, precision farming tools can facilitate the creation of a field map illustrating the weed species distribution in the field. To identify weeds, you can use an identification guide, either hard-copy or electronic (many smartphone apps are already available). Do not underestimate the importance of keeping such records. Keeping track of your weed population and spread can give you information concerning the effectiveness (or not) of a control measure and can point out the areas of the field needing extra attention (precision control).

The weed species in corn are classified in two ways :

The weed species may differ among different areas-countries and fields. Most governments publish such local lists. Some of the most important weeds for maize can be found here (3). Except for the weed history of the field, the farmer should be able to recognize the different weed species from an early stage (cotyledons or coleoptile) to select the best control measure and implement it as soon as possible.

Any change in the weed management strategies or/and the cultivation systems (e.g., the transition from conventional to organic/conservation agricultural system) will probably change the dominant weed species and population size in a field (3).

Among all weed species, Striga ( Striga asiatica (L.) Kuntze) or witchweed is a major enemy of maize, causing yield losses up to total crop failure (4), especially in Africa. To set Striga under control, scientists have recently developed an efficient technology that involves the coating of IR maize varieties with imazapyr (5).

Resistance of the weeds to the herbicides used is a significant global problem. The cases probably differ per country and the active compound of the herbicide. Keep an eye on the latest updates here(6).

Some common examples of weeds in maize crop that have developed a herbicide resistance to at least one mode of action are:

Integrated Weed Management in simple words means using multiple techniques, like tillage, use of herbicides, and other action that can affect weed density, survival, competition, and species. This approach is highly recommended since the combination or/and a frequent rotation of control measures will allow long-term weed management with a higher success rate and a more sustainable profile. In most cases, farmers choose to combine the below-mentioned measures. However, there are some cases, like in intensive monoculture of maize, where the farmers rely more on a solution like herbicide application due to its lower cost and faster-better results that usually offers.

Most farmers rely on the successful control of weeds already before sowing their crop. A relatively weed-free field and a fast sprouting and growing maize variety will reduce the need for any post-harvest operation and, as a result, the cost for the farmer will be decreased. The measures used are:

The seedbed preparation starts long before sowing the maize into the field. Depending on the cultivation system and the intensity of the weed infestation in the field, the farmer might need from 1 up to 6 tillage sessions combined in most cases with herbicide spraying. .

Flame weeding (can be used more cost-effectively on smaller farms) (7).

Crop competition. Crop competition in maize may involve techniques such as reduced row spacing, increased planting density, and the use of competitive cultivars that exhibit weed suppressive potential.(8)

The farmer should keep in mind that wider raw/plant distances will leave more space for the light to penetrate the crop, facilitating the germination and growth of weeds. There is no “golden recipe” for finding the ideal distances, and the farmer will need to experiment for some seasons.

Use more weed-competitive maize varieties (with high ear Prolificacy or not, the sprouting and emergence rhythm, etc.),

Use of competitive cultivars that exhibit weed suppressive potential

In this case, the farmer needs to decide if he/she will use a broad-spectrum or a selective herbicide. Usually, the farmer uses a mixture of a triazine herbicide, such as atrazine or terbuthylazine, for broadleaf weed control and a chloroacetanilide such as alachlor, metolachlor and acetochlor for the control of grass weeds (Foundation for Arable Research(9). The different weed types absorb the active compounds with a different mechanism, and the effectiveness of the application is affected by external factors as well (e.g., soil moisture, etc.). You must consult a licensed agronomist and read the label of the product carefully before use, so as to avoid overdose.

To avoid the development of resistance in the weed population, you can change the herbicides (mode of action) frequently. Finally, certain bio-herbicides are available that can be used as an alternative.

Especially in the case when the maize has been sown early and the sprouting rhythm was low, there might be the need for complementary weed control applications. Until the canopy closure of the crop, these stages are characterized as “critical” to the crop. The farmer should keep the weeds under control during these first crop stages to protect the final yield. This critical period lasts till 21-28 days after sowing, when the maize has developed 8-10 leaves (10). Weeds must be removed early (before they grow 2-4 leaves).

After the crop has appeared, the farmer can apply one of the below strategies:

Timing is essential for the success of this measure. Weeds must be removed early (before they grow 2-4 leaves). This will reduce the competition with the crop for nutrients, light, and water on time. Post-emergence tillage can be implemented when the crop has fixed row distances (no random sowing) to reduce the damage to the seedlings caused by the machines or the farmer.

Use of selective (narrow-spectrum) Herbicides

Maize has a very low competitive ability against weeds during the first growth stages.

The herbicides’ post-emergence application can occur in specific areas of the field where the problem (=weeds) is traced. The weed map of the field will be handy to define that. Like the pre-emergence application, the farmer should keep a record of the effectiveness of the measure and use herbicides with a different mode of action. This will reduce the danger of resistance development of the weeds to specific compounds. The Iowa State University released a list of the new products for weed control in maize in 2021 (11). Keep in mind that some measures can indirectly favor maize against weeds. For example, a well-balanced fertilization and irrigation scheme can boost the crop and accelerate its growth.

Intercropping and crop rotation for better weed management in corn

Monoculture of maize in a field for many years can dramatically affect the weed composition and population. The introduction of other plant species (usually crops) in the field can make a difference and decrease the yield losses for maize. The farmer can do that by applying:

The cultivation of two species-crops into the field during the same cultivation period. This is usually happening in strips (strip-cropping)

The crop rotation in a field can follow a 2 to even 5-year scheme.

*Use of cover crops and intermedia crops

In all three strategies, maize is characterized as the main crop. This means that the companion crops selected should “help” maize increase its crop yield, even at their expense. The farmer should choose the side crops after a well-studied investigation. For better results, you can advise your local agronomist.

The above-mentioned crops are generally suggested and used in maize crop rotation programs. In general, in both systems, we need to select species that are not closely related to each other and have different weed and phytopathogenic “enemies.” This will significantly reduce the selection pressure on specific weed species, reducing their strong presence in the field. The crop rotation is a very efficient control measure for two important weeds of maize; the Cyperus spp. and the Sorghum halepense (common name: Johnson grass)