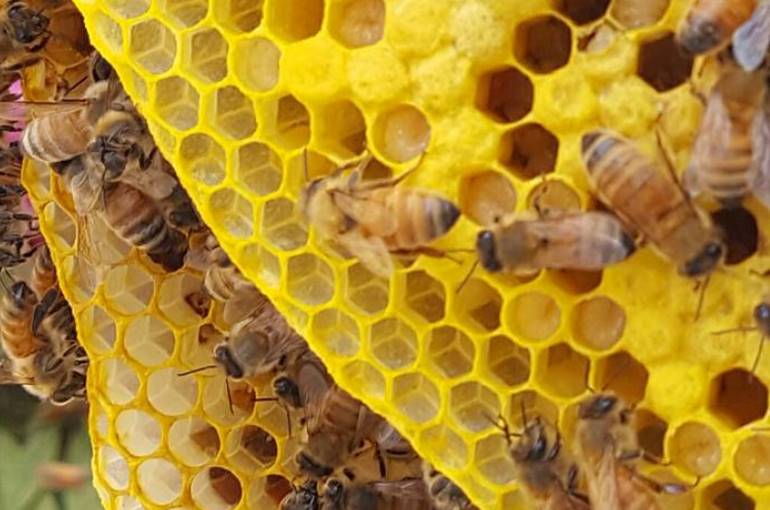 The natural proliferation and reproduction of the apiary is called swarming. Swarming normally takes place during spring or early summer (April – June). In a nutshell, the queen accompanied by a number of workers leave the apiary in search of a new nest. This group of bees (the queen accompanied by its loyal worker bees) will most probably rest in a branch of a nearby tree, but it will soon find a new nest, will settle down and continue its life cycle. Meanwhile, in the hive there are enough bees and some queen cells, from which new queens will be raised. If the beekeeper does not intervene, the strongest of these queens will emerge and finally prevail (by stinging and killing all rival queens) and become the new queen. Swarming is nothing that the bees or the beekeeper must be accused of. Bees are genetically programmed to swarm, when they find the suitable conditions to do so. Without swarming, honeybees would not have survived through the thousands of years, before their domestication by humans. However, uncontrolled swarming does create problems to the beekeeper, because the beehive population (and hence production) is reduced by 50% or more. Every beekeeper shall examine the ways in order to prevent swarming or take advantage of a swarming in controlled conditions. Even the most experienced beekeepers see some of their bees swarm every year.

There are several anti-swarm measures. Some beekeepers clip one wing of the queen so that it cannot fly (an old technique but with fanatic supporters even today). Others rearrange the hive and decrease the bees’ population, so that the queen can communicate better with all the workers through pheromones. One of the most common factors that trigger swarming is the reduction of pheromone creation by an old queen. Thus, many worker bees do not listen or refuse to take orders from the queen. This is often exacerbated when the bees are crowded inside the hive and the ventilation is poor. The queen is then frustrated from its inability to control and motivate the hive, so it escapes in order to create a new smaller society, consisted solely of fewer but loyal and “faithful” worker bees. Thus, for once again, having a young (up to 2 years old) and thriving queen in our hive will save us from a lot of trouble. Preventing the overcrowding and congestion of bees and improving ventilation inside the hive are also necessary techniques so that the beekeeper can be proactive and prevent swarming.

In general, swarming hives do not store enough honey that can be collected by the apiarist, nor do they offer good pollination service in nearby crops. Furthermore, the beekeeper runs the risk of not being able to spot or capture the swarm. Instead of waiting for the flock to swarm and then chase it, we can carefully create the suitable conditions that will promote the split of a single colony in two, under controlled conditions and before natural swarming takes place. In this case, we will benefit from the controlled swarming by dividing the colony, while avoiding the risks. We can carefully place an empty hive close to the one we want to divide. We remove half of the frames of the old hive (but not the one with the queen) and transfer it to the new (there should be 2 to 3 frames with open and sealed broods as well as broods of the same day). The configuration must be from outside to inside: honey-pollen-brood. We transfer the new “orphan” hive to the desired location and leave the door open. In five days we check for “queen cells” and we only leave 2. We add food. We check if the old beehive (in which we have left the queen) develops normally. Of course, these directions are simplified and such complex handlings require some experience. It is better to be accompanied by an experienced apiarist during your first split efforts.

You can enrich this article by leaving a comment or photo of your swarming control methods.

Do you have experience in Beekeeping? Please share your experience, methods and practices in the comments below.

All the content you add will be soon reviewed by our agronomists. Once approved, it will be added to Wikifarmer.com and it will influence positively thousands of new and experienced farmers across the world.