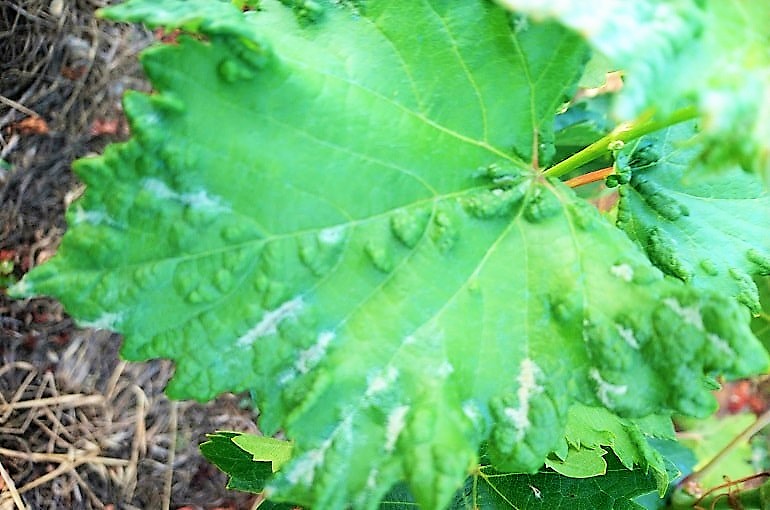 Phylloxera vastatrix (PLANCHON), is such a destructive aphid for grapevine’s root system, which was mainly the reason for the utilization of grafted plants in Europe. The pest is native to America, where most grapevine varieties have developed immunity against it. In Europe, it first appeared around 1850-60 and since then is one of the main grapevine enemies. The insects feed on the roots and leaves of the plant. We can recognize phylloxera due to the appearance of galls on roots and sometimes on foliage. The damage on roots is catastrophic, as the pest may destroy the root system of the plant completely. The only management measure for European varieties is to graft them on American rootstocks, as some American varieties are resistant to the aphid.

Lobesia botrana is a moth native to Italy and is one of the most common grapevine pests in Europe. In America, it was recorded for the first time during the previous decade. It prefers grapevine, but it can also attack Rosemary plant or Almond tree. The females may lay more than 30 eggs per day. The first larvae feed on leaves, but the next generations feed on berries, something that results in decreased yield.

Precautionary measures include pheromone traps, constant monitoring of the crop, and weed removal. Pheromone traps are a commonly used technique. They attract male insects, keeping them away from fertile females. Thus, they reduce their reproduction.

Chemical control should only be used in cases of severe problem and always under the supervision of a licensed agronomist.

Grape Berry Moth, Endopiza viteana or Paralobesia viteana, is a pest native to North America. The pest is able to cause serious economic losses in commercial vineyards. The moth has 2 or 3 generations per year. Adults overwinter and start to lay their first-generation eggs on flower clusters late in spring or early in the summer, before the blooming stage. Larvae of the following generations attack fruits in order to feed, causing serious damage. When our grapes suffer a grape berry moth attack, we will most probably observe webs around fruits and flowers. We can also see black tunnels at the surface of the fruit (the larvae have entered the berry).  Attacked fruits not only cannot be marketed, but also face a greater risk of fungal infections. Some precautionary measures include pheromone traps, constant monitoring and weed removal. Once the crop has been attacked, management is more difficult. Due to the fact that pests develop immunity against pesticides, the best method to control it is through biological control. Unfortunately, the pest can overwinter in the soil.

Despite its name, Japanese Beetle (Popillia japonica), is not as catastrophic in Japan as it is in the United States. We can easily spot the beetle with the naked eye, due to its size (15mm or  0.59 inches). Beetles overwinter in the soil and start their attacks during spring. Theses beetles attack a wide range of plant species (vegetables, trees, flowers, etc.). As far as vineyards are concerned, they skeletonize the leaves as they feed on them. Management includes precautionary as well as chemical measures to control the attack. Some preventive measures include pheromone traps, constant monitoring, and weed removal. Pyrethrin based insecticides are used in some cases, always after consulting a local licensed agronomist.

Downy mildew is maybe the most serious grapevine disease, outbreaking mostly in areas with a warm and humid climate. It is caused by the fungus Plasmopara viticola and may lead to 100% crop devastation. Spring and summer rains favor the disease’s outbreak. The pathogen overwinters on buds, leaves or on the soil upon dead leaves. It affects buds, foliage, flowers, fruits, and stems. Oil spots appear on the upper surface of the leaves, resembling a mosaic. On the underside of the leaves, we may observe white mildew. Shoot necrosis is another common symptom. Inflorescences are also affected by the fungus, which causes them to wilt and drop. If the infection occurs at a later stage, when the plant has fruits on it, the grapes may harden, turn brown, shrink and finally fall.

Disease control begins with proper precautionary measures. These include weed control and safe distances between plants together with proper pruning, and removal of dead plant tissues from the ground. The general condition of the crop (nutrients and water level, sun exposure, aeration) can also boost their immunity. Access of an infected plant to direct sunlight may delay the rapid outbreak of the disease. It is also crucial to use proper sanitation, such as tools disinfection every time we touch the plants.

Chemical treatment can be used only if the problem is severe and always under supervision from a local licensed agronomist. Copper compounds have been used since 1880. Today, although the copper-based fungicides are still used, there are many alternatives in the market, including biocontrol agents, materials of animal origin, plant extracts (Salvia officinalis) and others.

Powdery mildew is another major disease of grapevines. The funguses Uncinula necator and Erysiphe necator overwinter on buds, leaves, or canes, and start the infections when spring comes. The disease is favored by high temperatures combined with medium relative humidity. The pathogen causes powdery growth on the green parts of the plant. Symptoms start with chlorotic spots on foliage, similar to those caused by Plasmopara viticola, but smaller. Later on, a white powdery substance appears. This white powder also appears on stems and fruits. Symptoms on fruits also include tearing, necrosis, and drop. The disease can result in decreased product quality and yield, and decreased winter hardiness of the plant, even in cases of mild infection.

Disease control begins with proper precautionary measures. These include weed control and safe distances between plants together with proper pruning, and removal of dead plant tissues from the ground. The general condition of the crop (nutrients and water level, sun exposure, aeration) can also boost plants’ immunity. Proper training and pruning are very important in the control of Powdery Mildew. Proper air circulation and direct access to sunlight will delay the disease outbreak.

Chemical treatment involves the use of sulfuric compounds. Many growers use sulfur in temperatures between 18-30 °C (64.4 – 86 °F). However, in low temperatures, sulfur may be inactive, while in temperatures over 30°C , it may cause chemical burns on fruits. In any case, chemical treatment is always used under supervision from a local licensed agronomist. It is also crucial to use proper sanitation such as tools disinfection every time we touch the plants.

Esca is a serious wood disease caused by different funguses. This is why it is called Esca complex. The disease was believed to affect only mature plants, ten years or older. However, it is now believed that it can affect young plants, even in the nursery. Heavy pruning, winter frost, and any wood injury may weaken the plants and accelerate the disease cycle. Esca disease is called “silent disease,” meaning that the symptoms can often go unnoticed, and in some cases, it may cause sudden death of the plant. It has become a major problem for mature European vineyards in Italy, France, and Spain.

The most common pathogen is Fomitiporia mediterranea. On leaves, symptoms occur because of toxins coming from Phaeomoniella, Phaeoacremonium, and Cylindrocarpon spp. Esca may appear as a chronic disease, or by sudden apoplexy during hot and dry periods.

Symptoms include a tissue discoloration in a cross-sectional cut of the trunk. The wood can also become soft and yellowish. In some cases, we can spot the appearance of characteristic tiger stripes on leaves. Dark spots may also appear on berries. The disease can be transferred by infected propagated material and wind. Disease control includes mainly precautionary measures, such as the use of healthy propagated material, disinfection of big pruning wounds and removal and burning of diseased plants.

The disease mainly affects mature grapes that are close to the harvest date. We primarily observe a brown spot on the grapes, that gradually covers the entire fruit. The fruit changes color, softens, rots, and finally mummifies. Those mummified grapes that will fall on the ground, if left there, will be the most effective vehicle for the disease spread. Soon after, many fruit clusters are affected due to direct contact with infected fruits. In a few days, all the infected parts are covered by a characteristic grey mold. Infections are favored by high humidity levels in a wide range of temperatures. Wind and rain spread the spores rapidly from plant to plant.

Control measures are similar to those used in other fungal diseases. Sanitation is very important. Infected plant tissues must be immediately removed, while proper pruning will promote good air circulation, something that inhibits the disease’s progress.

What is worth mentioning, though, is that under specific weather conditions, Botrytis may cause a different situation, known as noble rot. Under those circumstances, we have a remarkable increase in relative sugar content up to 40%. In a few words, it does so by causing water to evaporate and thus increasing the sugar proportion in the remaining juice. Many producers take advantage of this, producing sweet wines of unique characteristics.  However, the success of this technique requires special handling and many years of experience.

Black rot is a fungal disease caused by the pathogen Guignardia bidwellii.

The warm and humid climate favors the disease outbreak. The disease affects all green parts of the vine, but the most serious consequences appear on the fruit. As its name proclaims, the disease causes infected grapes to soften, rot, and get mummified. Those mummified grapes that will fall on the ground, if left there, will be the most effective vehicle for the disease spread.

Disease control begins with proper precautionary measures. These include weed control and safe distances between plants, together with proper pruning, and removal of mummified grapes from the ground. Proper sun exposure and good air circulation will inhibit the disease outbreak.

Grapevines Planting and Plant spacing – Number of plants per hectare

Grape Harvesting – When and How to Harvest Vineyard

Grape Yield per Hectare and Acre

The use of Technology in Contemporary Viticulture

Do you have experience in commercial Viticulture? Please share your experience, methods and practices in the comments below. All the content you add will be soon reviewed by our agronomists. Once approved, it will be added to Wikifarmer.com and it will influence positively thousands of new and experienced farmers across the world.