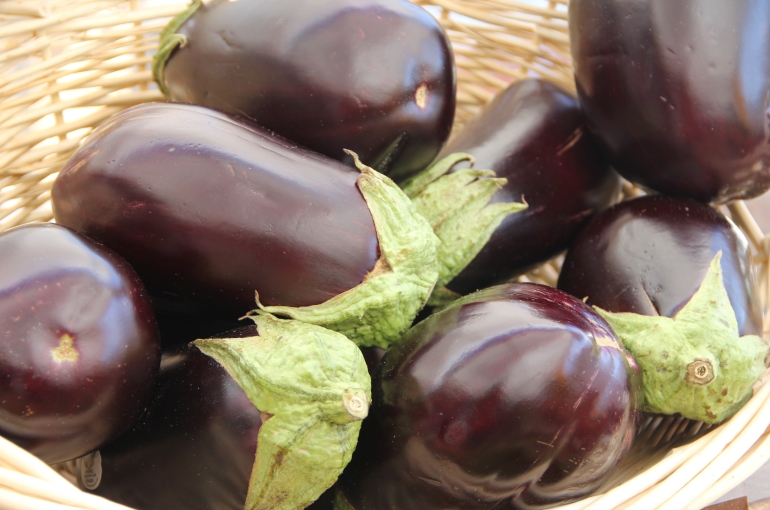 Eggplant is one of the top 10 plants in terms of Oxygen Radical Absorbance Capacity, according to the American Society for Horticultural Science.

In simple words, ORAC is a metric for the antioxidant content of a source. Eggplant contains a wide variety of health beneficial nutrients, which have been reported to reduce the risk of many lifestyle-related diseases.

However, eggplants as any other food shall be consumed in normal quantities and only as part of a balanced diet. Eating raw eggplants shall be avoided. Moreover, consuming eggplant flowers or leaves can be dangerous for human health. Members of Solanaceae family produce a substance called solanine, which acts as the plant’s natural pesticide and is poisonous if consumed in large quantities.

According to USDA, 100g of raw eggplant contains (among others):

What makes eggplant a great health booster is its high anthocyanins content. Anthocyanins are water-soluble pigments and belong to the wider category of flavonoids, which are famous free-radical fighters.

A study published in the American Journal of Clinical Nutrition (AJCN) suggests that the consumption of foods with high flavonoids content, like anthocyanins, could lower mortality risk from heart diseases.

Moreover, their protective action against free-radicals may have anti-cancer effects. Anthocyanins may stop the tumor formation of new blood vessels by blocking the enzymes that participate in the spreading of cancer cells. Finally, a specific anthocyanin called nasunin, which can be found in eggplant skin seems to protect brain cells from free- radicals related damages.

Eggplant is a great source of dietary fiber. Dietary fiber boosts the good functioning of the digestive system and control cholesterol levels.

Eggplant is a source of K, which helps lowering blood pressure levels.

Vitamins of the complex B

Eggplant contains vitamins of complex B, such as B5 and B6. B6 participates in brain neurotransmitters synthesis such as serotonin, melatonin and dopamine, which are known to help with anxiety and fear regulation.

Eggplant is a source of vitamin C, which boosts both the immune system and skin health.